Cebu was the first place in the Philippines, where the Spanish settled so it has a lot of Spanish influence and heritage spots. The first known conflicts against foreigners took place on Mactan Island almost 500 years ago. Lapu-Lapu who is regarded as one of the first Filipino heroes fought with his men against the Spaniards and killed the famous Portuguese explorer Ferdinand Magellan. And Magellan’s cross, which he ordered to be planted in Cebu on his arrival, is a popular tourist attraction.

Cebu is also famous for the Sinulog Festival, which celebrates the child Jesus, and occurs every year during third Sunday of January. The is an array of colorful street parties which attracts vistors from all over the Philippines and from around the world.

Although Lechon (roast pig) can be found in all parts of the Philippines, it is reported that the best can be found in Cebu. Even Anthony Bourdain the celebrity chef and author referred to Cebu lechon as “the best pig ever” on his television show ‘No Reservations’.

Cebu is located to the east of Negros, to the west of Leyte and Bohol islands. The province consists of Cebu Island, as well as 167 smaller islands, which include Mactan, Bantayan, Malapascua, Olango and the Camotes Islands.

HOW TO GET TO CEBU BY AIR

Cebu Airport is the second busiest airport in the Philippines, after Manila and accepts international flights from 30+ international destinations and also flies to all the main domestic airports in the country

It is located in Lapu-Lapu City on Mactan Island and was originally a US Airforce airport and was called Mactan Air Base. It was used in the Vietnam conflict as a base for their aircraft, but was then transitioned into a passenger terminal to replace the original Cebu airport called Lahug Airport, which was unable to expand to cope with the rising number of visitors flying into the region.

Over the past few years there has been calls for a second runway to be built, although currently it would involved the displacement of a number of businesses that been a stumbling block so far.

You can search for and book the cheapest flights to Cebu or any other destination you wish by using the search forms below. It’s searches hundreds of airlines to get you the best deal.

HOW TO GET TO CEBU BY FERRY

With a travel time of almost 22 hours, the ferry from Manila to Cebu is not one of the most popular routes in the Philippines, especially with the budget airlines offering affordable prices directly into Cebu.

Other ferries are available that connect Cebu with Bohol, Cagayan, Surigao and details of all these and other travel options can be found using the search form below

WHERE TO STAY IN MACTAN - CEBU

As Cebu has the second biggest transport hub in the Philippines and is also the largest business district outside of Manila, it has attracted a lot of the international hotel chains and 5 star boutique hotels and resorts as well as great value accommodation to cater for all budgets.

Cebu is a large island and has a number areas to stay, which include Mactan, Maolboal, Oslob, Malapascua. On this page we will concentrate on the the Mactan Island area as that is the most commercial tourist destination in Cebu, but we will also have other pages which highlight the other places mentioned. 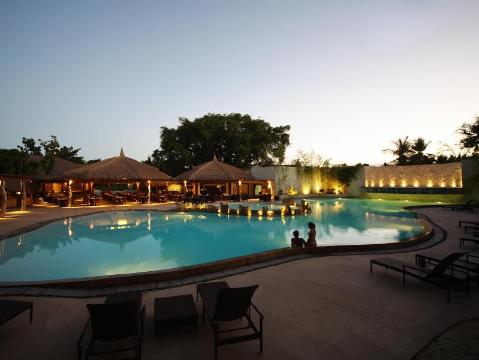 Bluewater Maribago Beach Resort is a rustic resort for travelers interested in convenience, relaxation, and plenty of leisure activities. Guests enjoy en-suite private verandas, king-sized beds, living rooms, mini bars, televisions, and hammocks. Deciding what to eat and drink may prove to be a difficult task as there are five restaurants and three bars to choose from. Sample international and local cuisines or light snacks from the Spa Café Juice Bar. Reserve a full day of pampering at the Maribago Blue Water Beach Resort’s Amama Spa as there is an extensive list of treatments and therapies. For the water sports enthusiasts, be sure to sign up for jet skiing and scuba diving, and drop the children off at the Dolpo Kids Club. 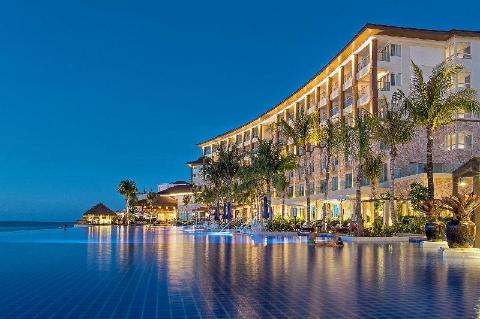 Dusit Thani Mactan Cebu Resort offers impeccable service and all the essential amenities to invigorate the weary traveler. Facilities like free Wi-Fi in all rooms, 24-hour room service, 24-hour security, and daily housekeeping are readily available for the convenience of each guest.

All guest accommodations feature thoughtful amenities to ensure an unparalleled sense of comfort. The property’s recreational facilities, which include, private beach, fitness center, and outdoor pool are designed for escape and relaxation. Dusit Thani Mactan Cebu Resort is an ideal place of stay for travelers seeking charm, comfort, and convenience in Cebu. 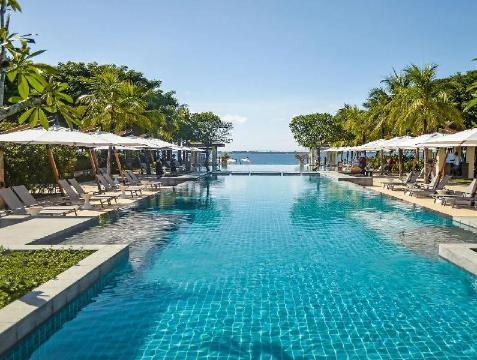 Situated in lush tropical gardens and surrounded by crystal blue waters, Crimson Resort and Spa is located in Lapu Lapu, one of the country’s most popular holiday destinations. This beachfront property is located 15 minutes away from Cebu’s Mactan International Airport. The resort features spacious guestrooms and suites, decorated with contemporary Filipino furnishings. There is a generous list of facilities and services which include 24-hour room service, a family room, facilities for disabled guests, and an executive floor. Recreation can be enjoyed on the golf course which is within three kilometers of the property, in the fitness center, or on the beach where all the water sports are. Crimson Resort and Spa is an ideal place to stay for vacationers. 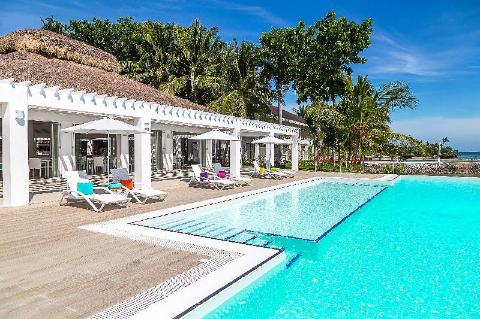 Offering hotel guests superior services and a broad range of amenities, Pacific Cebu Resort is committed to ensuring that your stay is as comfortable as possible.

132 rooms spread over 2 floors provide a warm and pleasant home away from home. Modern comforts such as internet access – wireless, non smoking rooms, air conditioning, wake-up service, desk can be found in selected rooms. The hotel’s badminton court, boats, watersports equipment rentals, snorkeling, private beach are ideal places to relax and unwind after a busy day. Whatever your reason for visiting Cebu, the Pacific Cebu Resort is the perfect venue for an exhilarating and exciting break away. 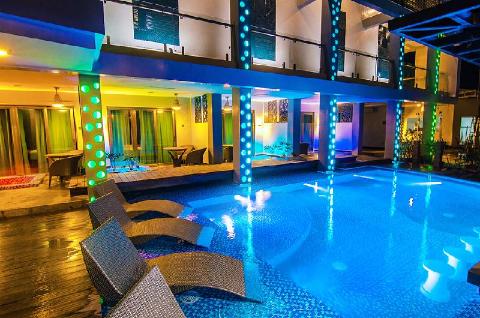 At Eloisa Royal Suites, every effort is made to make guests feel comfortable.

Costabella Tropical Beach Hotel is a very trendy, yet tranquil, accommodation offering close proximity to many of Cebu’s most popular attractions and beaches. Guestrooms at the Costabella Tropical Beach Hotel include air conditioning, refrigerators, mini bars, telephones, and scenic views of the surrounding nature. Enjoy an international breakfast from the hotel’s restaurant, and take lunch and dinner by the pool from the poolside restaurant and bar. The function and meeting rooms are equipped to host most company affairs and gatherings. Car rental is available for visiting nearby venues like Colon Street, Megellan’s Cross, and Taoist Temple. Challenge friends or colleagues to a friendly tennis match, or just have a chat over a few mixed drinks from the bar.

If the above choices don’t meet your needs then please use the search box below to take you directly to Agoda’s site. We have been using Agoda for a number of years, and they always provide a quality service at guaranteed lowest prices, in addition to AgodaCash where you can earn cash on every booking to spend on future trips.

WHERE TO EAT IN MACTAN - CEBU

As we have mentioned already, Cebu is famous for its Lechon and should not be missed when you visit, unless you are a vegetarian of course. But there are a number of other delightful dishes to be found and a large selection of top class restaurants that I am sure you will enjoy.

There are many claims from restaurants to have the best lechon in Cebu, but we tried it at the House of Lechon and it was really good. They also have Lechon Lumpia which is something new for us, but it was delicious. Lechon whereever you get it, is always a little bit pricey….but so worth it !! https://www.facebook.com/pg/HouseOfLechonCebu

In the Movenpick Hotel in Mactan you will the Ibiza Beach Club, which is a great location to relax, drink and have wonderful food. As the name suggests the menu has a Mediterranean feel to it, and we weren’t disappointed. From what we can remember from the menu they had filet mignon, rib-eye steak, baby back ribs, lamb, rock lobsters and tiger shrimp. I am a big lover of lamb, but had to go for the shrimp, and to be fair it was cooked to perfaction, definitely place we will go back to Ibiza Beach Club

The Lantaw Native Restaurant was a pleasant surprise, we were running late and getting hungry so we popped into one of the first places we came across. We have always loved floating restaurants and although this place wasn’t technically ‘floating’ it was situated above the water and had a great view and atmosphere to watch the sun go down. A wide range of local food, with gorgeous seafood made sure we were no longer hungry. Although the lechon looked very appetising we went for the tuna belly and beef nilaga, which was great. We hear that this place is so popular you have to book or have a short wait, but we must have just got lucky https://www.facebook.com/LantawFloatingNativeRestaurant

This is a selection of excursions available in Cebu that you won’t want to miss. You can also see further trips in our Tours and Day Trips section

This website uses cookies to improve your experience. We'll assume you're ok with this, but you can opt-out if you wish. Accept Read More